Abby Vargas is a naïve Toronto actor who is ready to fight to get to the top. She will be portrayed by Cassie Steele.

Abby's landlord evicts her so she breaks in to steal her stuff, despite her landlord's frustration that lead him to breaking her car window with his hockey stick. She heads to L.A. but after having the window broken and the car breaking down, she decides to call her friend Tariq and he gets her some help from Nick, who comes and fixes her car. Unfortunately, she's too late for her audition. But, on the other hand, Nick manages to land her a room at The Lux. Later that night at the pool party, she meets up with Tariq where she encourages him to force Jamaica Jay and Dynasty to listen to his tracks. Nick comes up to the two and he introduces Abby to Connor, where they both then go off to take a walk. Abby and Connor share a conversation on the rooftop which leads to them sleeping together. In the morning, Connonr buys Abby a morning after pill. After Connor leaves, Abby takes the pill and gets a call from her manager that she's able to go to her audition for today. But, the pill is going to make Abby very sick and even worse, her unpaid tickets on the car has caught up and there's a boot on it. Abby decides to take the bus and she arrives at the audition on time. If things can't get any more worse, she blows her audition halfway through by puking on the piano. Depressed and emotional, Abby runs into Alicia that night where Alicia offers her a job. They go to a club and Abby realizes that the job Alicia offered her wasn't what she expected.

Chris is Abby's ex-boyfriend in Toronto. This couple isn't going well as he is sick of their long distance relationship. They eventually end their relationship during Who You Know.

After sleeping with him on her first night in L.A. and him offering to take care of her, they quickly become good friends and she shows an attraction to him. 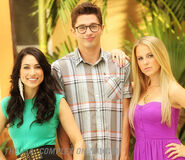 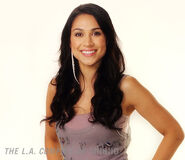 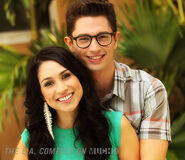